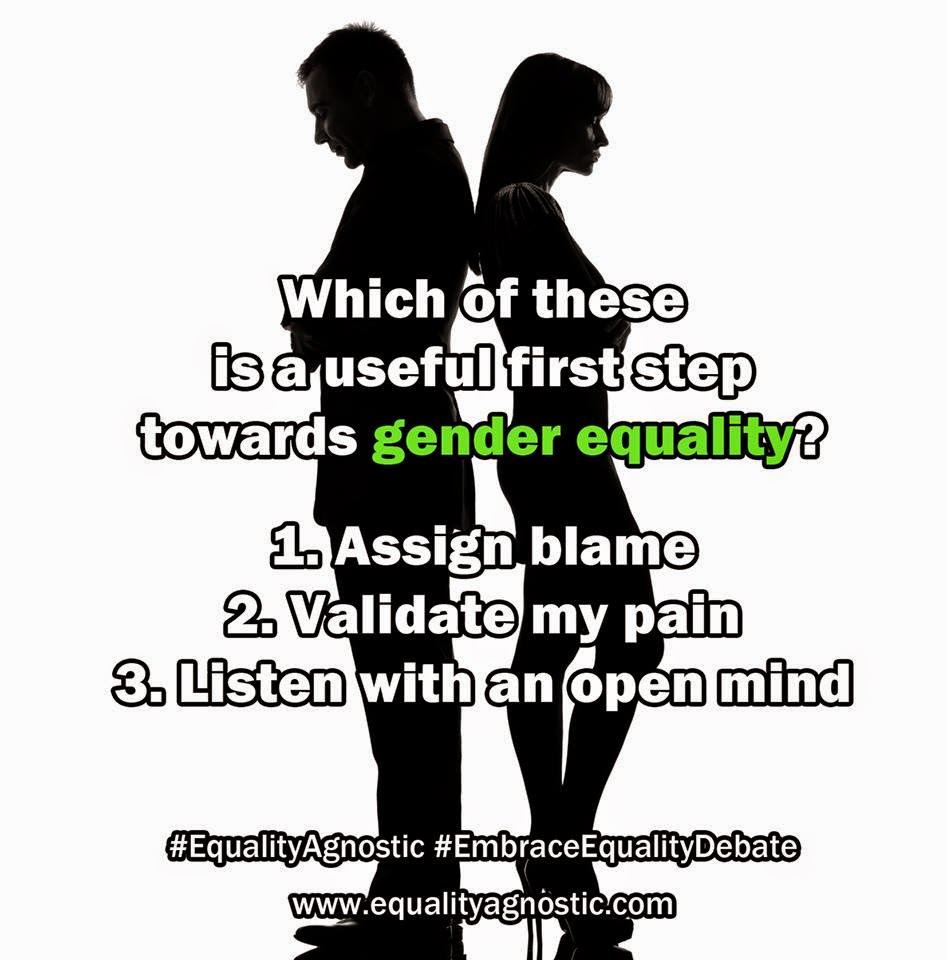 Picture this.  Two strangers drag themselves into the emergency room of a hospital, a man and a woman.  The man has had his left hand cut off; the woman has had her right hand cut off. As they enter they see each other and both scream:

“I’m hurt worse!  Help me first!”
Hearing the other person’s cry they look at each other and scream simultaneously, ‘No you’re not!’  Unwilling to take real action until the point is settled, they proceed to spend so much time arguing about the severity of their injuries, they both bleed to death and die.
It is my personal opinion that the biggest roadblock to solving the root causes of equality issues (including gender equality) is something I call: The ‘pain and blame’ game. Part of this is due to the fact that in our current society—pain—is political currency.
Some time ago I watched a pair of American politicians debate gay marriage rights.  I had written off the anti-gay politician as a hack until a few questions into the debate the pro-gay rights politician drew comparison between the struggle of the African-American community and that of the LBGT community.  At that moment the candidate presenting the argument against the awarding of equal marriage rights for LBGTs said something like this:
‘I think you’re doing the African-American community a disservice.  The struggle they went through, and still do, is far worse than anything experienced by a minor LBGT section of the population.’
Suddenly I sat up, and blinked.  In one smooth move the anti-gay candidate had changed the entire feeling of the debate.  The audience split.  In an instant the conversation was no longer about the struggle of homosexuals to be assigned the same rights as heterosexuals.  Suddenly the conversation was about assigning degrees of suffering. I had/have it worse became the argument that had to be won.  Aside from the obvious degrees of suffering assigned to slavery, the wording threw additional points of contention:
A minor section of the population—does this mean marriage rights isn’t a serious issue because of how few LBGT there are compared to heterosexuals and or African Americans, does the number of people suffering define an issue’s severity? ‘A’ minor section?  Does the ‘A’ signify that gay marriage is an issue not supported by all of the LBGT community but rather by a small disenfranchised rabble rousing segment and if so, if it’s not an issue felt by every single member of the community, does that define its severity?  The list went on, the debate fell apart.
Gender equality issues have been stuck in that same place for almost 50 years.
Feminists point to horrors such as bride burnings and acid attacks and countless other atrocities that target primarily women.
Mens Rights Activists point out the overwhelming societal bias of making men fill roles that end in death, workplace injury, higher suicide rates and shorter life spans.
Neither of them is wrong, but by making the focus of the debate ‘my issues are worse’ the focus becomes the war, not the injury. I do not blame Feminists or Mens Rights Activists for their adversarial positions. There is a sad truth that when you’re drowning in pain it’s almost impossible to not lash out at everything that comes close, but when we are so invested in our pain that our cause becomes preaching its validity, rather than its solution, we hurt ourselves the most.
So I ask you this:
Do you believe the measure of our equality objectives is best served by assigning a value to who is in more pain, or to how we resolve our shared (though different) pain?

Personally I have yet to meet the patient whose ailment was healed by assigning a degree of severity, treatment however, seems to be effective and while there is truth that in a medical situation, triage assigns priority to the person most likely to die – humanity is not on its death bed, it is however suffering. I therefore argue that ‘worse’ is irrelevant in the greater scheme of acknowledging the need for treatment and the assignment of care for the human race.
We cannot heal by assigning blame.
We cannot heal by arguing degrees of severity.
We can only heal by seeking and accepting help.

51 Replies to “The pain and blame game of equality debate”