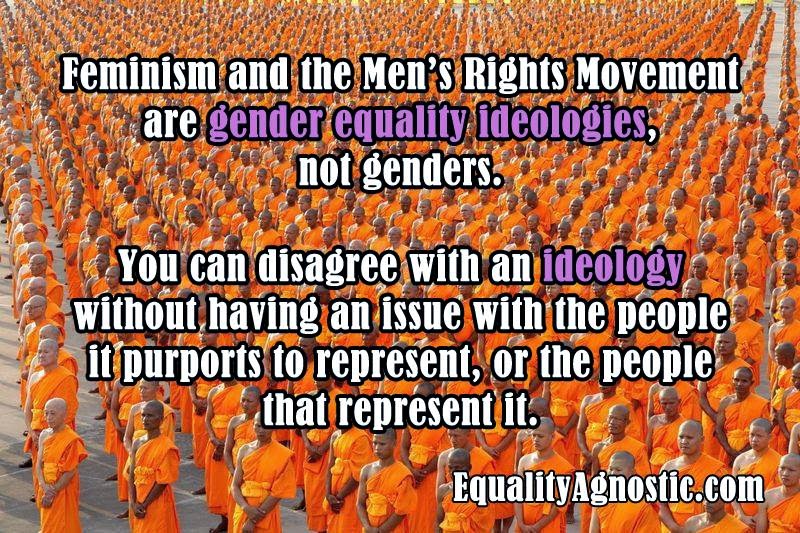 For those who may be unfamiliar with equality ideology, Feminism is a gender equality ideology followed by Feminists.  The Men’s Rights Movement (MRM) is a gender equality ideology followed by Men’s Rights Activists (MRAs).
There are going to be a series of people who see this article’s heading and will ignorantly respond with, “You’re not a Men’s Rights Activist, because you don’t hate women.”
I want to clarify with absolute certainty that I do not view MRAs as women haters.
Feminism and the Men’s Rights Movement are  gender equality ideologies, not genders.
Being an MRA or a feminist speaks of a philosophical position on gender issues, gender inequality, their causes, as well as their solutions, and that is all. You can disagree with an ideology without having an issue with the people it purports to represent, or the people that represent it.
“But isn’t there an angry or hateful element to the MRA community?”
A while ago I released an article called “Am I dangerous?” (see here). It storied a perception plight faced by the majority of men in western culture.  The article clearly struck a chord as it was shared on many MRA pages and though viewed a few thousand times, I saw only one comment in response to the question posed by the article title that made me pause.  It said this, “You’re damn right I am!”
I think that comment speaks to an underlying anger experienced by an element of the MRA community. However the comment was just one in thousands, I see many of the same kind of comments from feminists when discussing gender issues. In each case, the individual is not indicative of the whole and that becomes obvious when you spend time on ‘moderated’ pages for either group.
If anything, most MRAs I meet are amazed to meet anyone sympathetic to their cause, they are that used to being attacked and ridiculed. My partner recently met a man where she explained the awareness campaign I’m running for gender issues affecting both genders. She described his response as “amazement spoken in hushed whispers lest anyone overhear”.  That’s the average MRA response, fear of persecution for an alternate perspective, joy that they are not alone in wanting to represent male gender issues—and in the case of meeting my partner, amazement that a woman is willing and open to the discussion of men’s issues.
I’m not sure why in western culture the majority understand that representing women’s issues is not an attack on men, but a desire to represent men’s issues is seen as anti-women.
As for the actual Men’s Rights Movement philosophy, I could turn this article into a long debate about individual elements of the MRM philosophy that I disagree with, and in future articles I’ll do just that—but my reason for not being an MRA is much simpler than that:
I love my mother, my grandmother, my sister, my aunt, my nieces, my partner and my female friends.
That may be a confusing thing to say after such a lengthy explanation of why I believe MRAs are not anti-women—however they are not pro-women either.  I respect a desire to represent and give voice to men’s issues but I feel that ultimately the pursuit of gender issues from just one perspective creates new inequality. I can’t be an MRA for largely the same reason I can’t be feminist, doing so picks a gender side, I have no interest in sides, I have an interest in resolving the gender issues and inequalities experienced (in different ways) by both genders.
To be completely blunt, my position on gender issues is governed by self-interest. That’s accurate for almost anyone representing gender issue, I’m just one of the only people being honest about it. If you think that’s not true… how many feminists do you know that aren’t female?  How many MRAs do you know that aren’t male?  Odds are, very few. My self-interest however expands beyond myself to my family and I’m not sure how anyone with a loving family (especially if you are interested in gender issues) cannot be firmly for combatting gender issues that affect more than just their own gender.
In short I don’t think being an MRA is enough in the fight against gender inequality and as there are men and women in my life that matter to me, I feel the need to pursue the issues experienced by both genders.
If you are a Men’s Rights Activist (MRA); know that I am empathetic to the fact that you are representing some of the world’s most politically unsexy gender issues like foetal rights, equal death for equal pay, equal time for equal crimes, and an end to male-gender-only military conscription. I support your wish to shine a light on these and other men’s issues. For myself however, I couldn’t sleep at night if I wasn’t also trying to shine a light on issues like rape, battered women, child brides and acid attacks.
That being said if you are an MRA, thank you for representing men’s issues. I respect anyone who fights gender issues and inequality for one gender, far more than those who are fighting for neither.
Did you find this interesting?  You might also enjoy the counter article “Why I’m not a feminist?”