Part 1 – The societal misrepresentation of men. 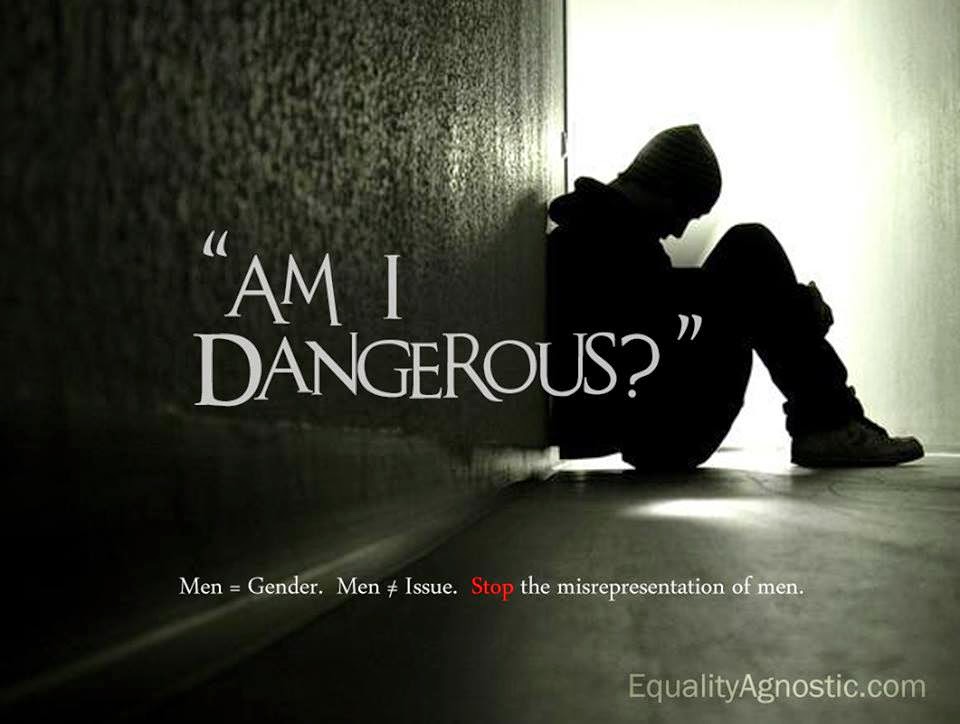 I want you to picture a world where every day, all day, you are told you are dangerous.
Every day, on posters, on billboards, on magazine covers, on newspapers, on TV news, on talk shows, on the radio, on social media, on internet forums, even just in conversation with well-meaning people—you are told over and over and over again that you are an instrument of violence, a harmful and oppressive force, guilty of acts of horror and pain and tragedy.
You… are a monster.
You can’t think of a single thing you’ve ever done in your life that might be deemed as monstrous or dangerous, but clearly you and anyone like you is a monster.  Everyone says so. How could so many people be wrong?
The message happens so often, that on a daily basis you accept it, you internalise it; you don’t even see it as strange.  You just go about your business.
As you walk down the street your path is blocked by a protest.  You see signs held by angry human beings that say ‘Don’t tell me how to dress, tell (you) not to rape.’  While you’ve never raped a person in your life and can’t imagine how you ever could, there’s probably a reason your identity is on the sign.  You bow your head, turn around and walk down a side street.  There’s no need to upset anyone after all.
You pass a Medicare office and see a poster that says, “We need to teach (you), not to hit girls”*—on the poster is the picture of a small boy striking a young girl.  You quietly acknowledge its validity.  You’ve never even considered hitting a girl, and though it’s probably meant for someone else, your identity is still on the poster. You acknowledge the importance of the message and you continue.
You wander into a bookstore to see what’s new and as you enter you see on display the latest self-help book entitled, “(You) are a jerk… until proven otherwise.”**
In every window, in almost every shop, your identity appears in the negative.
Saddened, you leave the shops and walk out onto the street to go home.  As you walk with your head down, thinking over what you have seen, two women walk towards you.  You try to make yourself small and unintimidating.  You smile in as non-threatening a manner as possible—it’s been a few days since you’ve shaved and you’ve been told that can be daunting to others.
They cross the road to avoid you.
But that’s ok, you understand. After all…
You’re dangerous.
If you’re female, this world might be hard to imagine.  If you’re a male who is part of western society, this is already your reality.***
Continue to Part 2: Male nature—Is violence and hyper-sexuality part of the biology of men
*“We need to teach our boys not to hit girls”—poster used as part of an Australian domestic violence campaign.
**“All Men are Jerks… until proven otherwise”—written by Daylle Deanna Schwartz
***Aside from the protest, this story is merely a retelling of a walk I took to and from my last house to the local shops.