The breadth and tone of popular feminism

PART 3 of 4: Thoughts on #WomenAgainstFeminism

Feminism is big.  Do you actually support all of it?

If you ask a ‘conservative’ feminist and a ‘stilleto’ feminist whether pornography is harmful to women, you will get two completely opposing answers.  But they both speak as representative of feminism as a whole.

If you think that the #WomenAgainstFeminism movement is misinformed or doesn’t understand feminism, keep in mind that feminism’s ideology is pretty broad and the portion of feminism you identify with may not be their issue.  What do I mean? Second wave feminismis for gender equality, (third wave is built on second wave) but the majority of it is driven from the position that equality comes from ending the oppression of women—by men—specifically, patriarchy.  If you believe in patriarchy you are of the belief that there is a global culture for oppressing women and that essentially all men are part and parcel of that oppression.  Women are victims of this oppression and must be ‘empowered’ in order to be equal.
The second wave feminist’s definition of a feminist and equality looks more like this: ‘A feminist is for the equality of all genders, because once women have the privileges that men do, we’ll all finally be equal,’ and if you go to your average Facebook feminist page, feel free to paste that comment anywhere and you will generally get a resounding ‘hell yeah!’ 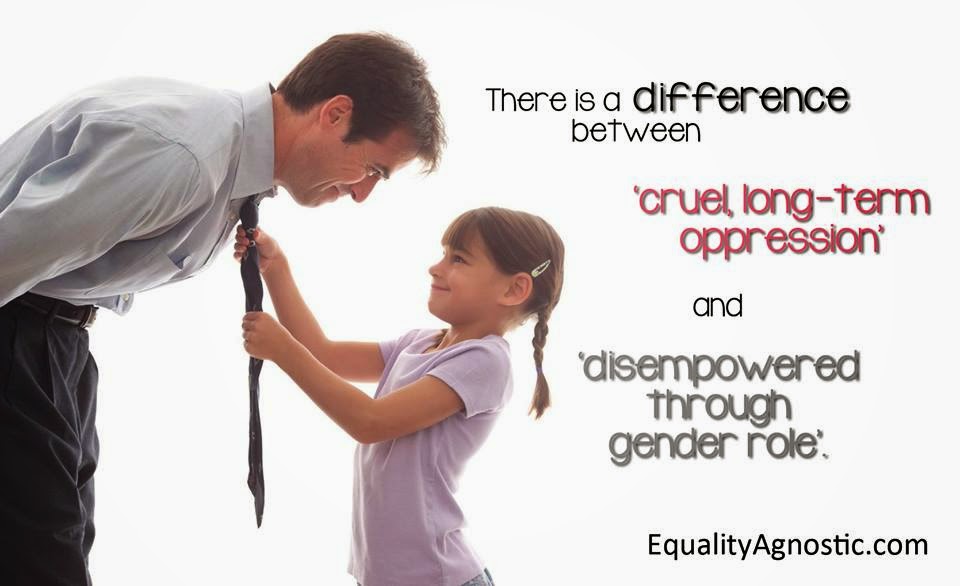 Patriarchy is not a position supported by all feminists, this is an interesting white paper on how it has been recieved over the years if you want to learn more about it.  In short, there is division between those that believe there is a difference between ‘cruel, long-term oppression’ and ‘disempowered through gender role’, but feminism does nothing at large to segregate those beliefs as part of its public message—which can make it seem like one loud angry voice.

The public tone of popular feminism

In my opinion, the brand of feminism that supports the concept of patriarchy is the loudest voice for feminism, and I’d suggest that is because it’s the angriest.  The problem is once emotion becomes obvious, people start to hear tone instead of message and tone is divisive.  A lot of the people posting pictures on #WomenAgainstFeminism are protesting against the tone of popular feminism and the placement of themselves or the men they love within the context of patriarchy. Add to this public image issue the concepts promoted by radical feminism.
If you’re not a feminist, radical feminism appears synonymous with the general feminist message, primarily because the larger mainstream feminist majority isn’t shouting those radicals down or publically distancing themselves from their message.
Radical feminists promote many ideas, some of which are just hateful misandry in all but name.  For instance, one radical feminist notion is the idea that placing a penis into the vagina, even when consensual, is rape, as it is harmful and oppressive to women.  Another is that being attracted to a woman’s body in any way shape or form, even the woman you love, is objectification and therefore oppression (see Views on Sexual Objectification).  I have yet to meet a woman who doesn’t want her partner to be attracted to her body, so if views like this cause a member of #WomenAgainstFeminism to hold up a sign that says “I don’t need feminism because, I like when men compliment my body”, consider the position that those women are not misinformed, they do know what feminism is about, but what they are protesting against is a section of feminism you do not personally identify with.  To them, it’s all just feminism.
So how do feminists fix feminism’s public image?  Part 4: Represent your feminism