PART 2 of 4: Thoughts on #WomenAgainstFeminism

If you believe that all people are equal and should be treated that way regardless of race, age, gender, economic status or sexual orientation, while you may also be a feminist, that is not the feminist agenda—google egalitarianism.   If any of the following is also a new concept to you, consider that you may not actually be a feminist, you may be equality agnostic with a female bias. 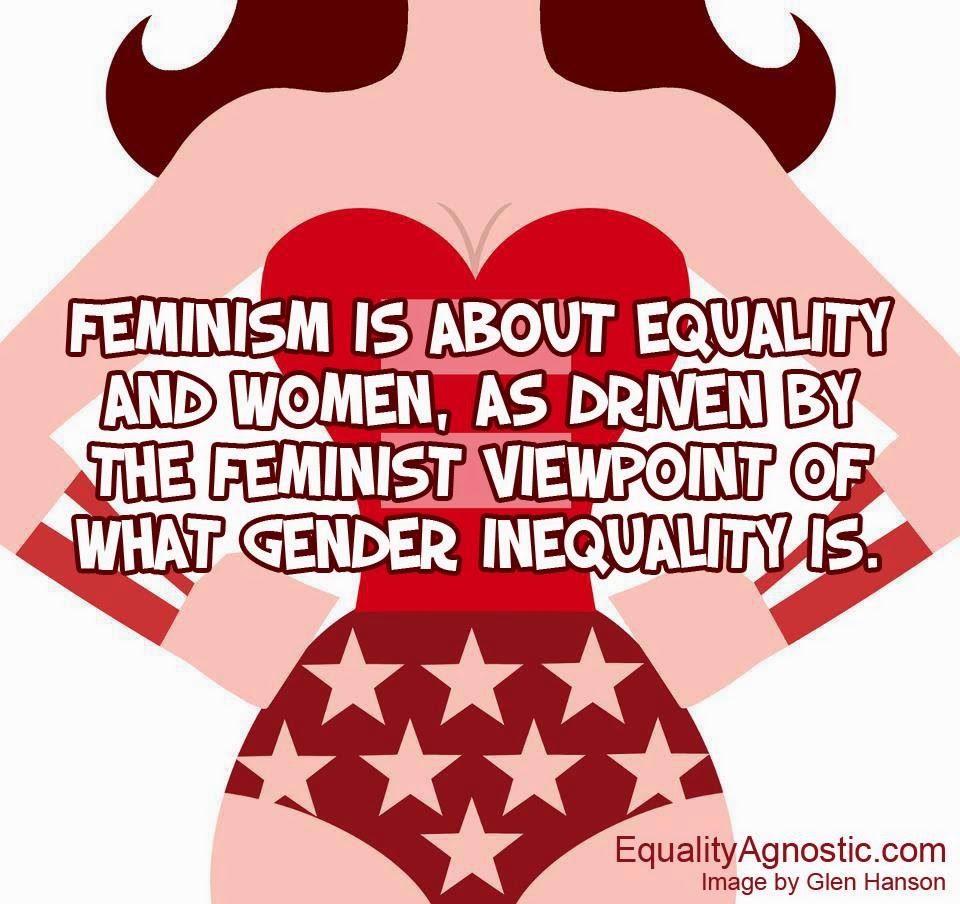 Feminism is about equality and women, as driven by the feminist viewpoint of what gender inequality is. That viewpoint is very different to the MRM’s viewpoint, which is why the definition of feminist matters.  Feminism brushes up against many issues because half of humanity is female—but if it fights for cerebral palsy victims it’s because they are women, not because it represents cerebral palsy.
There are two core sides to feminism:
The National Organisation for Women (NOW) famously supported a series of lawsuits by men against women’s only gyms.  In instances like this it prioritises ending gender discrimination over women’s issues. However it only did so after being approached by the plaintiffs’ representation, it does not go searching for issues that affect men.
Women Against Rape on the other hand is fighting to end rape as a women’s issue, it is not fighting for an equal number of rapes in the male population or on behalf of male rape victims.

What they both have in common is this—they do not represent the male gender.
Saying that feminism is an equality movement representative of, or for, both genders, is like saying the goal of a nuclear apocalypse is world peace…
Because once everyone’s dead, how can we wage war?
Feminism incidentally sometimes addresses issues experienced by men, but only because doing so furthers the agenda of helping women; it does not seek out men’s issues.   It is similar to when Men’s Rights Activists lobbied for Family Law to be changed, allowing for both parents by default to be awarded equal custody of children of divorce, they provided those children automatic access to their fathers—but they do not represent children.
The only people to percieve feminism as an all inclusive order are feminists, and even then it is not an opinion that has consensus amongst feminists. In the words of feminist Jay Aaminah Kahn, a male feminist is “…just a man looking for a cookie and a pat on the head… and we’re allllll out of cookies my friend.”  Spend some time in the average feminist chat room and you’ll hear this kind of sentiment, over and over and over.
Publicly, men are lauded for a feminist approach. Privately, they are often pariahs.
Are #WomenAgainstFeminism just misinformed?
Part 3: The breadth and tone of popular feminism