PART 1 of 4: Thoughts on #WomenAgainstFeminism
All Ideologyis just a system of ideas, represented by flawed humans.
There was a time when the only Christian religious ideology was Catholicism.  Now we have many denominationsthat identify with Christianity, but each denomination has different ideas about what that means. Feminismis female-focused, gender-equality ideology (MRM is the male-focused).  It is an ideology that has become so broad, it no longer has unilateral consensus amongst its followers on all that it represents, and this has become an issue for how it is perceived by non-feminists. 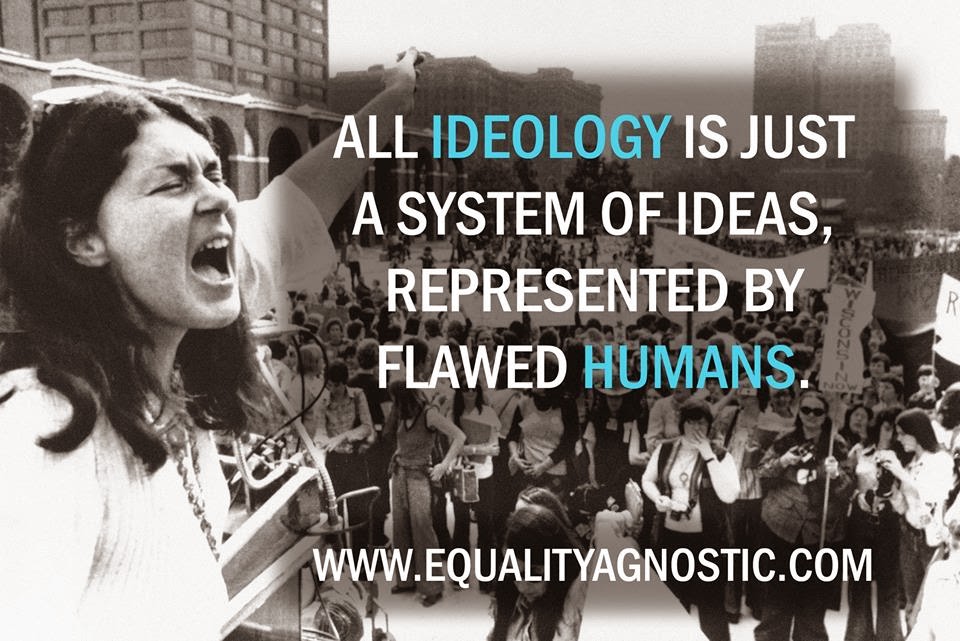 If feminism is to remain relevant it must break into the equivalent of distinct equality denominations, where being a feminist is as much about what you exclude from your feminist message, as what you include.  There are already many flavours of feminism, but rarely do individual feminists cite their ‘denomination’ when speaking on behalf of feminism—to use the example of religion again, feminists tend to say the equivalent of ‘I am Christian’ instead of ‘I am Anglican’.  This solidarity is actually harming the feminist message.

#WomenAgainstFeminism has shone a spotlight on three challenges that feminism needs to address to remain relevant:
Unfortunately some feminists are trying a different path.  Instead of adopting and promoting their ‘denomination’, they are trying to dilute the feminist message even further in an attempt to make it more palatable to non-feminists.

Why the definition of ‘feminist’ matters

Feminism is not egalitarianism, or even gender equality agnosticism, but the recent surge of awareness attached to #WomenAgainstFeminismis causing some feminists to try pretty hard to make it look that way. If you think this might be you, consider the possibility that doing so is harmful to the feminist message.
Right now this definition is floating around on some feminist pages: Feminist: a person who believes in the social, political and economic equality of the sexes. This definition is the equality ideology equivalent of someone who wears a ‘Jesus loves me’ t-shirt and calls that Christianity.  Why? Because in both those examples that definition is only one part of their ideology…
By limiting the definition of ‘feminist’to the above, I could take the word ‘feminist’ and replace it with the words ‘Men’s Rights Activist’ and it would still be true.
Those two camps aren’t sending the same message, though they are both for gender equality (I personally would be happier if they joined forces, but I don’t see it happening). If feminism wants to promote itself as the equality ideology representing women, it can only do so by sticking to its guns.