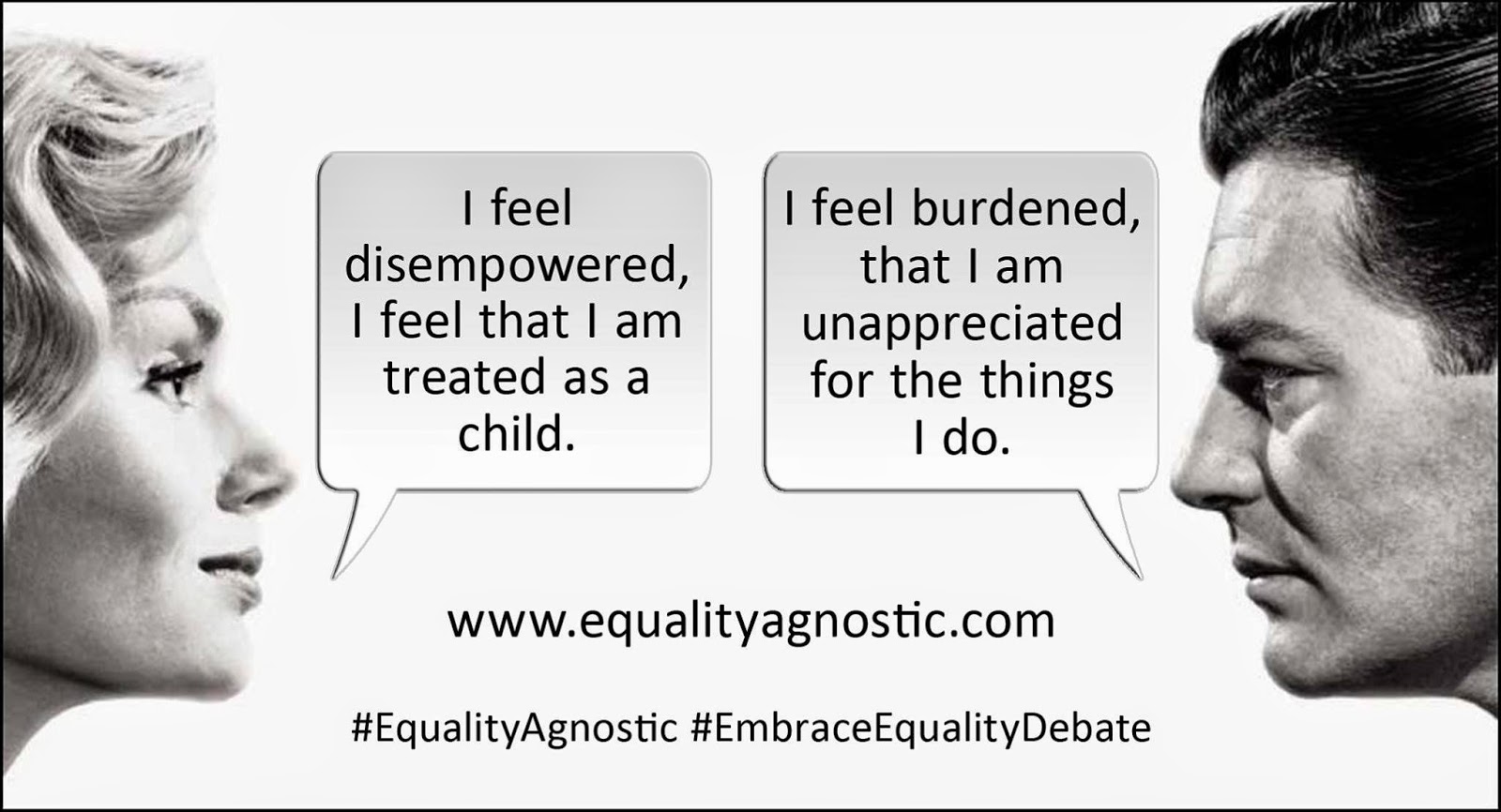 ‘I feel disempowered, that I am treated as a child.’
‘I feel burdened, that I am unappreciated for the things I do.’
If humanity were boiled down to a man and woman in couples counselling, the above conversation would summarise the heartland of the gender equality debate since the 1960s, with the first speaker being Feminism and the second being the MRM (Men’s Rights Movement).
When I listen to Feminists and Men’s Rights Activists (MRA) speak about how their issues are received, both come from a position of anger and or frustration. When you speak to someone who is angry or frustrated it is hard not to pick up on and reciprocate that tone.  I admit I fall into this pattern for both the feminism and MRM perspectives when I feel like the person I’m speaking to seems more interested in ‘winning’ than in having an open minded discussion.  In one such discussion, the person I was speaking to essentially threw their hands in the air and said, ‘Dan–this is not about you!  It’s about me!’
To which I quietly responded, ‘I thought it was about us,’ with us being humanity as a whole.
If humanity as a whole actually were in couples counselling, we’d have been ejected from the room by the horrified counsellor, who’d be screaming for security and telling us never to return. That’s because when a hardened Feminist or Men’s Rights Activist (MRA) speaks, both present the entirity of the other gender as a unified organised front, a front that is working as an oppressive force against the gender that they as Feminists or MRA are trying to protect.
I have bad news for anyone who actually believes an entire gender is out to get them (or their sex). Since the dawn of time there hasn’t been a single issue that the entirity of the human race, or even just half of it under the banner of shared gender, could agree on.  That makes it impossible for humanity or a gender to work on anything together as part of a co-ordinated force.  If you already know that, you might have come to an obvious conclusion:
There is no secret men’s club with agenda.
There is no secret women’s club with agenda.
Even if there were, they would represent that club—they would not represent the entirity of their gender because we are all just people.
When any of us speak about a gender issue, try to remember that ultimately we are speaking to a person.  In gender debate, if that person is of the opposite sex, naming that sex as part of a force that causes us pain dissociates them from the conversation and makes them defensive.  The person across from us (hopefully) is not personally causing us pain, but by naming their sex as the issue they are being pigeonholed as part of that force.  No matter how legitimate the feelings, our audience no longer hears ‘men’ or ‘women’–they hear YOU, YOU are doing this to us or me and YOU generates anger and resistance.  YOU is the single most damaging word in any reconciliation conversation, and that’s what we’re really trying to achieve.  We as a race are trying to bring men and women together by ending gender roles and the associated manifestations of inequality. As these issues were created by millions of years of societal survival-focused thinking and we’ve only been discussing how to end them for around fifty years, it’s reasonable to be bad at discussing them.
When next you speak on equality, try and use gender neutral language—name ideologies, objects, things that are unlikely to be perceived as YOU. It will be incredibly difficult and frustrating to do at first, because it’s almost impossible to mention gender equality issues without mentioning gender.  But as there are two genders, one planet, and as neither of us wants to be without the other gender, perhaps it is worth trying a little harder to work together.