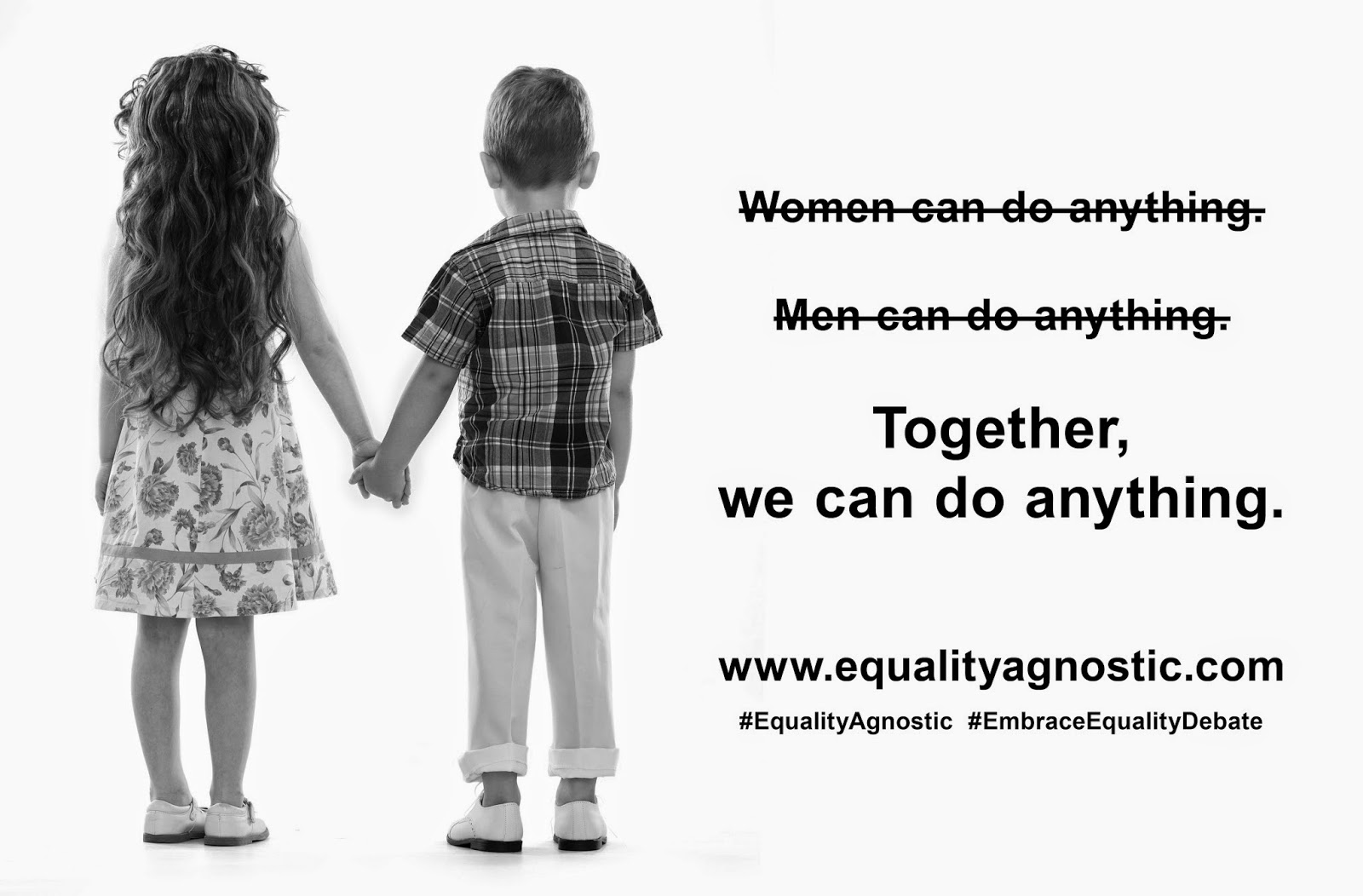 I believe that gender inequity is a direct result of the continued enforcement of outdated gender roles in both men and women.

Feminism has done wonders for showing women that they have choice as to the type of role they play in our modern society, with strong messages related to seeking personal fulfillment instead of an outdated gender role.


I don’t believe men are hearing the same message.

Most men I speak to accept that women have choice as  to their societal role, they respect women’s right to that choice… then return to trying to fulfill ‘protector/provider’ roles instead of understanding they also have choice.


If you feel that gender roles are no longer an issue, consider this small example.  Most countries provide the option of a government subsistence as a dependant to women, but not men. We cannot provide this option to men because gender roles tell us men are either providers, or failures.  While we loudly declare that we live in a world where a woman is a strong equal partner, we in the same breath tell men they cannot be financially dependent on those partners, because a dependant is not a man.

When I was a younger man still deciding on my education, I repeatedly gave up pursuing what I thought would make me happy, in favour of studying that which would make me ‘a good provider.’ When seeking advice from parents, guidance counsellors and friends it was repeatedly reinforced that this was the natural course to take, this was my role—‘happiness is something men pursue when they retire, until then, provide’.

It could be argued that my choices at attempting to fulfil my traditional gender role now make me part of a statistic showing a lack of equal representation for women in high powered jobs. Now, my attempts at fulfilling my gender role have inadvertently made me part of the face of inequity. I am certain if more sons had parents like John Lennon, if they were told to focus on being happy instead of successful, we’d have a greater degree of equal representation between men and women in high powered jobs.

Feminism taught me that women are my equal, it taught me how I could act to show women the respect and dignity we all deserve, it taught me they had choice and to respect that choice—I unfortunately had no voice that taught me how to do the same for myself or my sons. I say this not as blame, I say this out of envy—I so wish someone had done this for me. Now, at only 36, I feel close to burnt out. I have sacrificed almost a decade of my life in undertaking additional schooling (while working full time) in fields I had zero interest in but were crucial to my role as provider. I don’t want this future for my sons. I want my sons – our sons – to choose fulfillment, not gender role, to understand that raising a family is something men and women do together, that it is just as valid for a man to be a stay at home dad, as it is to be a lawyer or a doctor. Both are ‘success’ in their own way.  How can we expect women who choose fulfillment over finance to feel validated, if we do not staunchly tell men they not only can but must do the same?

When I was sixteen my girlfriend told me that she wanted a career. In a moment of courage (expecting to be laughed at again) I told her I wanted to be a writer that was a stay at home dad—she high-fived me and told me that was fine, that I could stay at home with our children. I unfortunately never met another person like her and when we broke up, I went into Network Engineering instead.

I want to protect my children from a life of ‘role’ instead of fulfillment, but I cannot do this on my own. Gender roles are reinforced at every level of society and most of us are insensitive to when it happens, or worse, we perpetuate it ourselves. The purpose of this blog (updated each Monday) therefore is to:

For this mission to achieve any measure of success it cannot just have my voice, it needs yours.

If you feel the objectives of this blog are something you can get behind I’d be grateful if you shared either the link to this blog, any of the images in our facebook photo gallery (click here), or even just tell one other person about what we’re trying to achieve, then ask them to do the same.

If the only thing that heightened awareness achieves is that we stop the enforcing of gender roles in our children out of ignorance, it will be an amazing victory, won a happier child at a time.

One Reply to “I need your help to end Gender Roles”